In the last post I wrote I had a first look into a plain, clean and lightweight React setup. I'm still impressed how easy the setup is and how fast the loading of a React app really is. Before trying to push this setup into a ASP.NET Core application, it would make sense to have a look into the ASP.NET Core React project.

You can either use the "File New Project ..." dialog in Visual Studio 2017 or the .NET CLI to create a new ASP.NET Core React project: 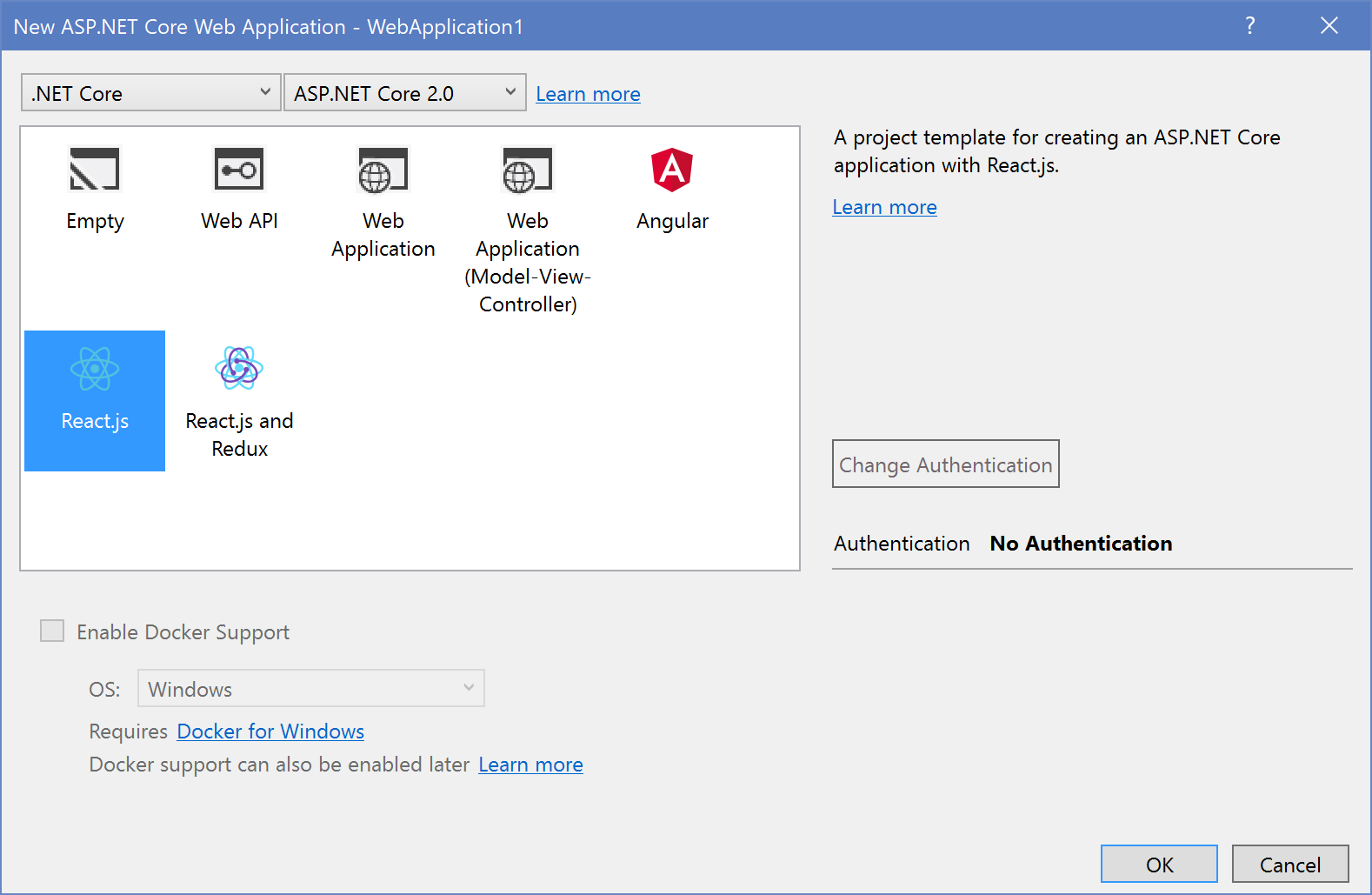 This creates a ready to go React project.

At the first glance I saw the webpack.config.js, which is cool. I really love Webpack and I love how it works, how it bundles the relevant files recursively and how it saves a lot of time. Also a tsconfig.json is available in the project. This means the React-Code will be written in TypeScript. Webpack compiles the TypeScript into JavaScript and bundles it into an output file, called main.js

Remember: In the last post the JavaScript code was written in ES6 and transpiled using Babel

The TypeScript files are in the folder ClientApp and the transpiled and bundled Webpack output gets moved to the wwwroot/dist/ folder. This is nice. The Build in VS2017 runs Webpack, this is hidden in MSBuild tasks inside the project file. To see more, you need to have a look into the project file by right clicking the project and select Edit projectname.csproj

You'll than find a ItemGroup with the removed ClientApp Folder:

And there are two Targets, which have definitions for the Debug and Publish build defined:

As you can see it runs Webpack twice. Once for the vendor dependencies like Bootstrap, jQuery, etc. and once for the react app in the ClientApp folder.

Take a look at the ClientApp

The first thing you'll see, if you look into the ClientApp folder. There are *.tsx-files instead of *.ts files. This are TypeScript files which are supporting JSX, the wired XML/HTML syntax inside JavaScript code. VS 2017 already knows about the JSX syntax and doesn't show any errors. That's awesome.

This client app is bootstrapped in the boot.tsx (we had the index.js in the other blog post). This app supports routing via the react-router-dom Component. The boot.tsx defines an AppContainer, that primarily hosts the route definitions. stored in the routes.tsx. The Routes than calls the different components depending on the path in the bowsers address bar. This routing concept is a little more intuitive to use than the Angular one. The routing is defined in the component that hosts the routed contents. In this case the Layout component contains the dynamic contents:

Inside the Layout.tsx you see, that the routed components will be rendered in a specific div tag that renders the children defined in the routes.tsx

Using this approach, it should be possible to add sub routes for specific small areas of the app. Some kind of "nested routes".

There's also an example available about how to fetch data from a Web API. This sample uses isomorphic-fetch' to fetch the data from the Web API:

Since React doesn't provide a library to load data via HTTP request, you are free to use any library you want. Some other libraries used with React are axios, fetch or Superagent.

A short look into the ASP.NET Core parts

The Startup.cs is a little special. Not really much, but you'll find some differences in the Configure method. There is the use of the WebpackDevMiddleware, that helps while debugging. It calls Webpack on every change in the used TypeScript files and reloads the scripts in the browser while debugging. Using this middleware, you don't need to recompile the whole application or to restart debugging:

And the route configuration contains a fallback route, that gets used, if the requested path doesn't match any MVC route:

The Integration in the views is interesting as well. In the _Layout.cshtml:

The actual React app isn't referenced here, but in the Index.cshtml:

This makes absolutely sense. Doing like this, you are able to create a React app per view. Routing probably doesn't work this way, because there is only one SpaFallbackRoute, but if you just want to make single views more dynamic, it would make sense to create multiple views which are hosting a specific React app.

This is exactly what I expect using React. E. g. I have many old ASP.NET Applications and I want to get rid of the old client script and I want to modernize those applications step by step. In many cases a rewrite costs to much and it would be easy to replace the old code by clean React apps.

The other changes in that project are not really related to React in general. They are just implementation details of this React demo applications

I didn't really expect such a clearly and transparently configured project template. If I try to put the setup of the last post into a ASP.NET Core project, I would do it almost the same way. Using Webpack to transpile and bundle the files and save them somewhere in the wwwroot folder.

To learn more about React and how it works with ASP.NET Core in Visual Studio 2017, I will create a Chat-App. I will also write a small series about it:

I also set-up a GitHub repository where you can follow the project: https://github.com/JuergenGutsch/react-chat-demo