Being a MVP has a lot of benefits. Getting free tools, software and Azure credits are just a few of them. The direct connection to the product group has a lot more value than all software. Even more valuable is the is the fact of being a part of an expert community with more than 3700 MVPs from around the world.

In fact there are a lot more experts outside the MVP community which are also contributing to the communities of the Microsoft related technologies and tools. Being an MVP also means to find those experts and to nominate them to also get the MVP award.

I also attended the summit this year. It was my third summit and the third chance to directly interact with the product group and with other MVPs from all over the world.

The first days in Seattle

My journey to the summit starts at Frankfurt airport where a lot of German, Austrian and Swiss MVPs start their journey and where many more MVPs from Europe change the plain. The LH490 and LH491 flights around the summits are called the "MVP plains" because of this. This always feels like a yearly huge school trip.

The flight was great, sunny the most time and I had an impressive view over Greenland and Canada: 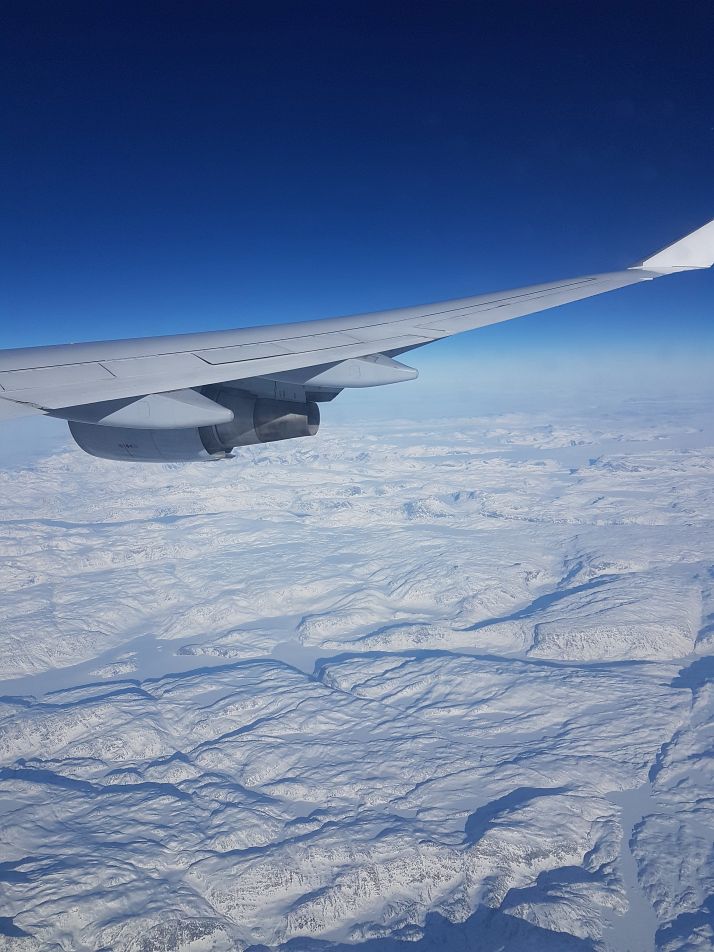 After we arrived at SEATEC, some German MVP friends and me took the train to Seattle downtown. We checked in at the hotels and went for a beer and a burger. This year I decided to arrive one day earlier than the last years and to stay in Seattle downtown for the first two nights and the last two nights. This was a great decision. 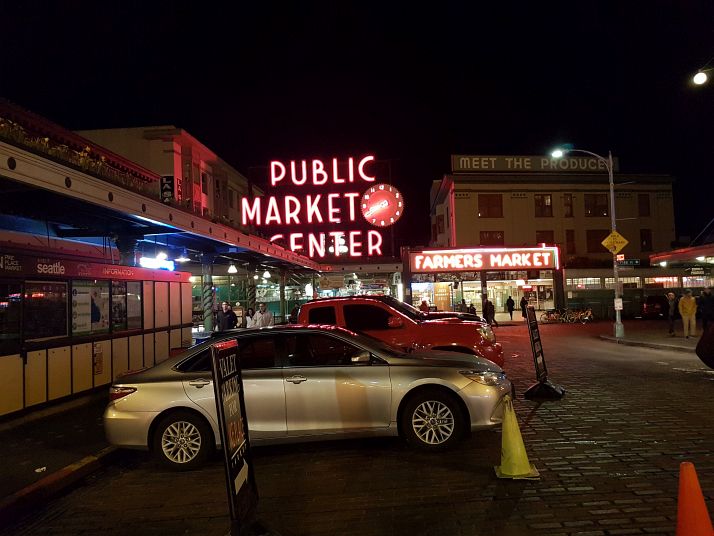 I spent the nights just a few steps away from the pike place. I really love the special atmosphere at this place and this area. There are a lot of small stores, small restaurants, the farmers market and the breweries. Also the very first Starbucks restaurant is at this place. It's really a special place. This also allows me to use the public transportation, which works great in Seattle.

There is a direct train from the airport to Seattle downtown and an express bus from Seattle downtown to the center of Bellevue where the conference hotels are located. For those of you, who don't want to spent 40USD or more for Uber, Taxy or a Shuttle, the train to Seattle costs 3USD and the express bus 2,70USD. Both need around 30 minutes, maybe you need some time to wait a few minutes in the underground station in Seattle.

After checking-in into the my conference hotel on Sunday morning, I went to the registration, but it seemed I was pretty early:

But it wasn't really right. The most of the MVPs where in the queue to register for the conference and to get their swag.

Like the last years, the summit days where amazing, even if we don't really learn a lot of really new things in my contribution area. The most stuff in the my MVP category is open source and openly discussed on GitHub and Twitter and in the blog posts written by Microsoft. Anyway we learned about some cool ideas, which I unfortunately cannot write down here, because it is almost all NDA content.

So the most amazing things during the summit are the events and parties around the conference and to meet all the famous MVPs and Microsoft employees. I'm not really a selfie guy, but this time I really needed to take a picture with the amazing Phil "Mister ASP.NET MVC" Haack. 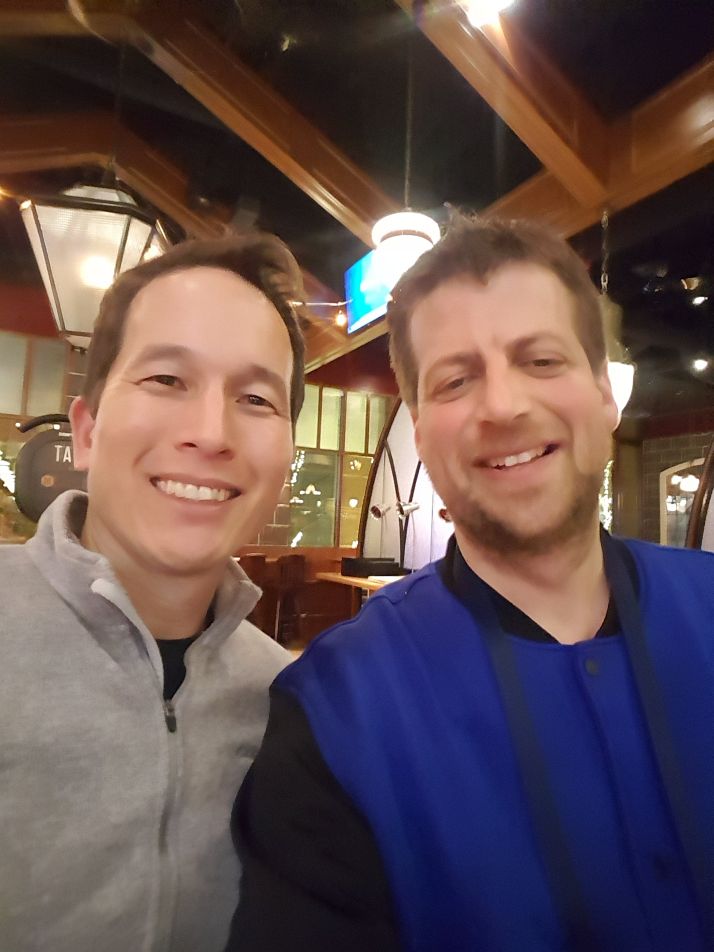 Special Thanks to Alice, who manages all the MVPs in the DACH area.

I'm also pretty glad to meet the owner of millions of hats, Mr. Jeff Fritz in person who ask me to do a lightning talk in front of many program managers during the summit. Five MVPs should tell the developer division program managers stories about the worst or the best things about the development tools. I was quite nervous, but it worked out well, mostly because Jeff was super cool. I told a worse story about the usage of Visual Studio 2015 and TFS by a customer with a huge amount of solutions and a lot more VS projects in it. It was pretty wired to also tell Julia Liuson (Corporate Vice President of Visual Studio) about that problems. But she was really nice, asked the right questions.

BTW: The power bank (battery pack) we got from Jeff, after the lightning talk, is the best power bank I ever had. Thanks Jeff.

On Thursday, the last Summit day for the VS and dev tools MVPs, there was a hackathon. They provided different topics to work on. There was a table for working with Blazor, another one for some IoT things, F#, C# and even VB.NET still seems to be a thing ;-)

My idea was to play around with Blazor, but I wanted to finalize a contribution to the ASP.NET documentation first. Unfortunately this took longer than expected, this is why I left the table and took a place on another table. I fixed a over-localization issue in the German ASP.NET documentation and took care about an issue on LightCore. On LightCore we currently have an open issue regarding some special registrations done by ASP.NET Core. We thought it was because of special registrations after the IServiceProvider were created, but David Fowler told me the provider is immutable and he points me to the registrations of open generics. LightCore already provides open generics, but implemented the resolution in a wrong way. In case a registrations of a list of generics is not found, LightCore should return an empty list instead of null.

It was amazing how fast David Fowler points me to the right problem. Those guys are crazy smart. Just a few seconds after I showed him the missing registration, I got the right answer. Glen Condron told me right after, how to isolate this issue and test it. Problem found and I just need to fix it.

The last days in Seattle

I also spent the last two nights at the same location near the Pike Place. Right after the hackathon, I grabbed my luggage at the conference hotel and used the express bus to go to Seattle again. I had a nice dinner together with André Krämer at the Pike Brewery. On the next Morning I had a amazingly yummy breakfast in a small restaurant at the Pike Place market, with a pretty cool morning view to the water front. Together with Kostja Klein, we had a cool chat about this and that, the INETA Germany and JustCommunity.

The last day usually is also the time to buy some souvenirs for the Kids, my lovely wife and the Mexican exchange student, who lives in hour house. I also finished the blog series about React and ASP.NET Core.

At the last morning in Seattle, I stumbled over the Pike Street into the Starbucks to take a small breakfast. It was pretty early at the Pike Place:

Leaving the Seattle area and the Summit feels a little bit of leaving a second home.

I'm really looking forward to the next summit :-)

Have I already told you, that every time I visited Seattle, it was sunny and warm?

It's because of me, I think.

During the last summits it was Sunny when I visit Seattle downtown. In summer 2012, I was in a pretty warm and sunny Seattle, together with my family.

This time it was quite warm during the first days. It started to rain, when I left Seattle to go to the summit locations in Bellevue and Redmond and it was sunny and warm again when I moved back to Seattle downtown.

Or maybe the rainy cloudy Seattle is a different one ;-)

Some of the topics I'm allowed to write about and I definitely will write about in the next posts are the following: