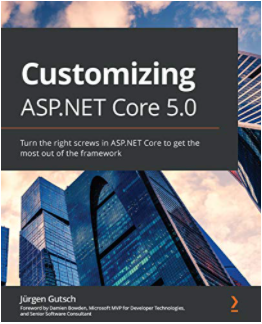 The most of you already know what middlewares are, but some of you maybe don't. Even if you already use ASP.NET Core for a while, you don't really need to know details about middlewares, because they are mostly hidden behind nicely named extension methods like UseMvc(), UseAuthentication(), UseDeveloperExceptionPage() and so on. Every time you call a Use-method in the Startup.cs in the Configure method, you'll implicitly use at least one ore maybe more middlewares.

Middlewares are executed in the order they are configured. The first configured middleware is the first that gets executed.

In an ASP.NET Core web, if the client requests an image or any other static file, the StaticFileMiddleware searches for that resource and return that resource if it finds one. If not this middleware does nothing except to call the next one. If there is no last middleware that handles the request pipeline, the request returns nothing. The MvcMiddleware also checks the requested resource, tries to map it to a configured route, executes the controller, created a view and returns a HTML or Web API result. If the MvcMiddleware doesn't find a matching controller, it anyway will return a result in this case it is a 404 Status result. It returns an echo in any case. This is why the MvcMiddleware is the last configured middleware. 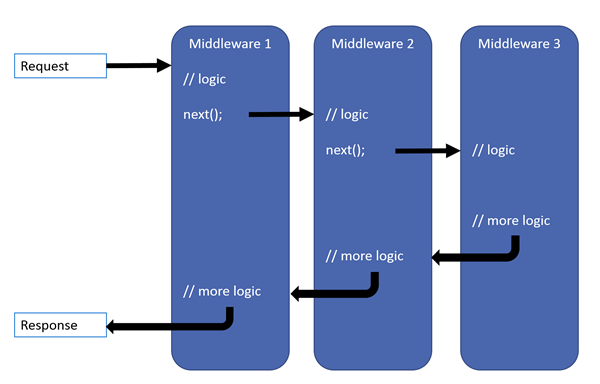 You are able to see how the pipeline is executed if you create an empty ASP.NET Core application. I usually use the console and the .NET CLI tools:

Open the Startup.cs with your favorite editor. It should be pretty empty compared to a regular ASP.NET Core application:

There is the DeveloperExceptionPageMiddleware used and a special lambda middleware that only writes "Hello World!" to the response stream. The response stream is the echo I wrote about previously. This special middleware stops the pipeline and returns something as an echo. So it is the last one.

Leave this middleware and add the following lines right before the app.Run():

If you now run the application (using dotnet run) and open the displayed URL in the browser, you should see a plain text result like this:

Does this make sense to you? If yes, let's see how to use this concept to add some additional functionality to the request pipeline.

ASP.NET Core is based on middlewares. All the logic that gets executed during a request is somehow based on a middleware. So we are able to use this to add custom functionality to the web. We want to know the execution time of every request that goes through the request pipeline. I do this by creating and starting a Stopwatch before the next middleware is called and by stop measuring the execution time after the next middleware is called:

After that I write out the elapsed milliseconds to the response stream.

If you write some more middlewares the Configure method in the Startup.cs get's pretty messy. This is why the most middlewares are written as separate classes. This could look like this:

This way we get the next middleware via the constructor and the current context in the Invoke() method.

To use this middleware, there is a generic UseMiddleware() method available you can use in the configure method:

The more elegant way is to create an extensions method that encapsulates this call:

This is the way you can provide additional functionality to a ASP.NET Core web through the request pipeline. You are able to manipulate the request or even the response using middlewares.

The AuthenticationMiddleware for example tries to request user information from the request. If it doesn't find some it asked the client about it by sending a specific response back to the client. If it finds some, it adds the information to the request context and makes it available to the entire application this way.

What else can we do using middlewares?

Did you know that you can divert the request pipeline into two or more branches?

The next snippet shows how to create branches based on specific paths:

The path "/map1" is a specific branch that continues the request pipeline inside. The same with "/map2". Both maps have their own middleware configurations inside. All other not specified paths will follow the main branch.

There's also a MapWhen() method to branch the pipeline based on a condition instead of branch based on a path:

You are also able to nest the maps to create child and grandchild branches of needed.

Another question that's middlewares related, I'm not sure why I never seen anyone using IMiddleware instead of writing InvokeAsync manually?!!

IMiddleware is new in ASP.NET Core 2.0 and actually I never knew that it exists before he tweeted about it. I'll definitely have a deeper look into IMiddleware and will write about it. Until that you should read Hishams really good post about it: Why you aren't using IMiddleware?

In the next to chapters I will have a look into different data types and how to handle them. I will create API outputs with any format and data type I want and except data of any type and format. Read the next part about Customizing ASP.NET Core Part 07: OutputFormatter