I mentioned in one of the first posts of this series, that we are now able to create ASP.NET Core applications without a web server and without all the HTTP stuff that is needed to provide content via HTTP or HTTPS. At first glance, it sounds weird. Why should I create an ASP.NET application that doesn't provide any kind of an endpoint over HTTP? Is this really ASP.NET? Well, it is not ASP.NET in the sense of creating web applications. But it is part of the ASP.NET Core and uses all the cool features that we got used to in ASP.NET Core:

In these kinds of applications, we are able to spin up a worker service that is completely independent of the HTTP stack.

Worker services can run in any kind of .NET Core applications, but they don't need the IWebHostBuilder to run.

In Visual Studio or by using the .NET CLI you are able to create a new worker service project.

This project looks pretty much like a common .NET Core project, but all the web-specific stuff is missing. The only two code files here are the Program.cs and a Worker.cs.

The Program.cs looks a little different compared to the other ASP.NET Core projects:

There is just an IHostBuilder created, but no IWebHostBuilder. There is also no Startup.cs created, which actually isn't needed in general. The Startup.cs should only be used to keep the Program.cs clean and simple. Actually, the DI container is configured in the Program.cs in the method ConfigureServices.

In a regular ASP.NET Core application, the line to register the Worker in the DI container will actually also work in the Startup.cs.

The worker is just a simple class that derives from BackgroundService:

The BackgroundService base class is still a well known IHostedService that has existed for a while. It just has some base implementation in it to simplify the API. You would also be able to create a WorkerService by implementing the IHostedService directly.

This demo worker just does an endless loop and writes the current date and time every second to the logger: 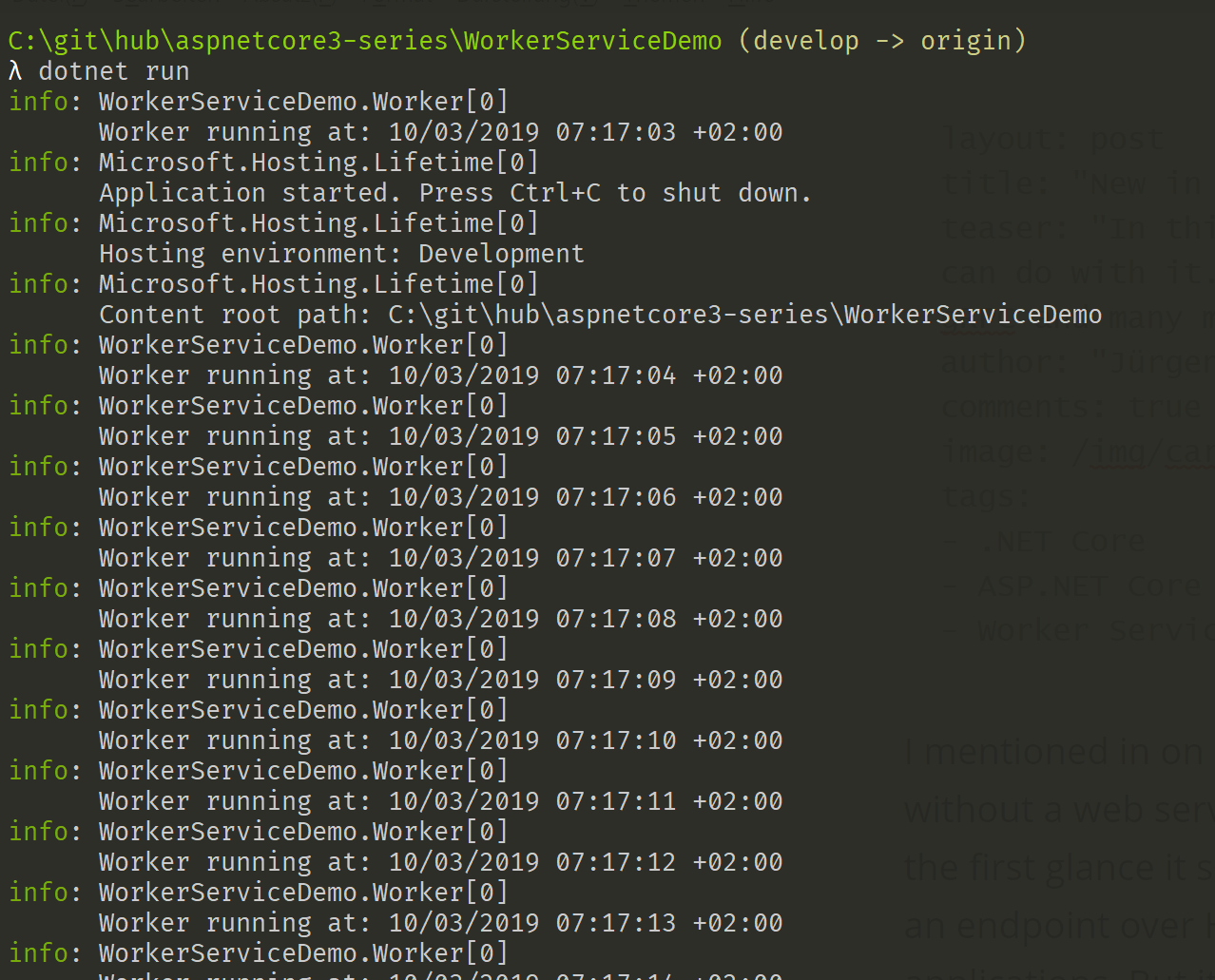 What you can do with Worker Services

With these kinds of services, you are able to create services that do some stuff for you in the background or you can simply create service applications that can run as a windows service or as a service inside a docker container.

Worker Services run one time on startup or just create an infinite loop to do stuff periodically. They run asynchronously in a separate thread and don't block the main application. With this in mind, you are able to execute tasks that aren't really related to the application's domain logic.

In a microservice environment, it would make sense to run one or more worker services in console applications inside docker containers. This way it is easy to maintain and deploy them separately from the main application and they can be scaled separately.

With the next couple of posts, I'm going to create an example of how to use worker services.

I'm going to write a weather station that provides a gRPC endpoint to fetch the weather data for a specific date. I'll also write a worker service that fetches the data using a gRPC Client and prepares the data for another app that will display it. At the end we will at least have three Applications:

I'm going to put those apps and the database into docker containers and put them together using docker-compose.

I'll simulate the days by changing to the next day every second starting by 1/1/2019. I already have weather data of some weather stations in Washington state and will reuse this data.

The weather station will have an SQLite inside the docker container. The separate database on a fourth docker container is for the worker and the web app to share the data. I'm not yet sure what database I want to use. If you have an idea, just drop me a comment.

I'm going to create a new repository on GitHub for this project and will add the link to the next posts.

I guess the Worker Services will be as most useful in microservice environments. But it might also be a good way to handle those mentioned aspects in common with ASP.NET Core applications. Feel free to try it out.

But what I also tried to show here is the possibility to use a different hosting model to run a different kind of (ASP.NET) Core application, which still uses all the useful features of the ASP.NET Core framework. The way Microsoft decoupled ASP.NET from the generic hosting model is awesome.