Until yet I wrote more than 30 blog posts with Pretzel and it works pretty well. From my current perspective it was a good decision, to do this huge change, to move to that pretty cool and lightweight system.

I'm using MarkdownPad 2 to write the posts. Writing goes much easier. The process is now simplified and publishing is almost automated. I also added my blog CSS to that editor to have a nice preview. 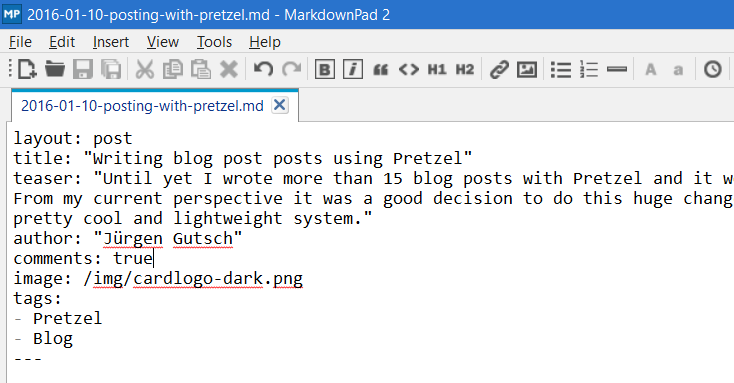 The process of writing and publishing new posts goes like this:

This process allows me to write offline in the train, while traveling to the Office in Basel. This is the most important thing to me.

The other big change, was switching to English. I now get more readers and feedback from around the world. Now the most readers are from the US, UK, India and Russia. But also from the other European countries, Australia, Middle East (and Cluj in Romania).

Maybe I lost some readers from the German speaking Area (Germany, Switzerland and Austria) who liked to read my posts in German (I need to find a good translation service to integrate) and I got some more from around the world.

Writing feels good in both, English and in the MarkdownPad :) From my perspective it was a good decision to change the blog system and even the language.

to learn more about Pretzel, have look into my previous post about using pretzel.